You used so much spice... 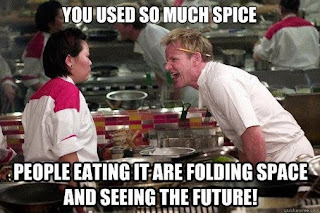 Nice to see a cross-over funny between two usually unrelated genres.
Posted by Paul Vincent at 17:28 No comments:

Deciding what to write next... 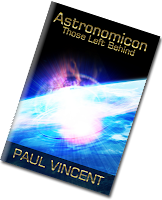 It's been quite a few weeks since I finished writing Astronomicon 3: Those Left Behind, and now I'm reaching that time when I have to commit to which novel I'm going to write first. I've always got four or five books in active development, but recently I've been concentrating on developing ideas for just three.

Last week I thought I'd narrowed this to just one, but then I had some great ideas for one of the two I'd put on hold. Now to make it worse the book I'm supposed to be concentrating on has hit a plot issue which I seem unable to solve.

So now I don't know which of these books will become my next full-time project:

Astronomicon: Deadline
The very first humorous book based within the Astronomicon universe. One man's quest to get back to Earth in time to claim his mystery inheritance. Will pirates, an aggressive robot, a hi-jacking or the discovery of alien life get in his way?

Astronomicon: Holy Earth
After surviving one of the worst disasters in space exploration, Mina, a senior engineer in the Colonisation Program sets out discover how the terrorists got a nuclear device past the Program's state-of-the-art security. She uncovers a conspiracy that goes deeper than she could ever have feared and becomes a target for some very dangerous people.


For now I will keep working on the planning for both, and I'll let you know how things develop.
Posted by Paul Vincent at 16:54 No comments:

Cover art for Astronomicon: Those Left Behind 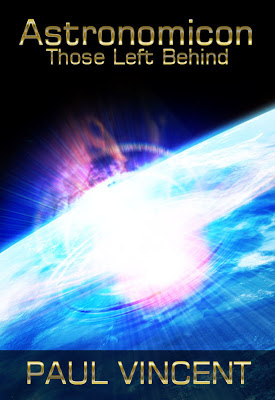 This is the excellent front cover design for Astronomicon: Those Left Behind. I hope you'll all agree that this is one of the best designs for an Astronomicon cover. It follows the same basic template as the other three books in the Astronomicon series, but features just about the most eye-catching imagery so far.

In case you are wondering, the image shows a planet being bombarded from orbit. When invading another world it makes sense to take out as much of their defence systems as you can before even considering visiting the surface, and a basic orbital bombardment is usually the best way to achieve that.

This image shows the Eridani homeworld, shortly before the Cephali ground assault commences.
Posted by Paul Vincent at 00:12 No comments:

Astronomicon: Those Left Behind 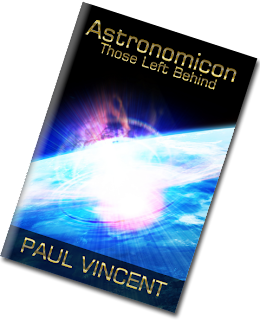 In the face of imminent destruction, a population makes a last stand against insurmountable odds.

Classic science fiction that will appeal to fans of Arthur C. Clarke. Astronomicon: Those Left Behind is the epic account of the deadly invasion of the Eridani homeworld. Caught up in the mayhem and destruction, one man strives to save his children. The evacuation fleet is their only chance, but first he must ensure that the fleet escapes without detection.

This third volume in the epic Astronomicon series is the story of the Eridani people's last stand, their attempts to  foil an alien enemy's attempt to wipe them from existence and a mystery that runs deeper than any of them suspect.


This was a particular interesting book to write, and most probably my best work to date. I gave many of the main characters much stronger motivations within the story and this, combined with the background of one species invading another, led to more emotion and drama within the story, driving it forward to a tragedy success at the end.

Bizarrely it's set a long time before any of the other Astronomicon books, with the story beginning in 1968, but it's important to read book 1 (The Beginning) and book 2 (Distant Relatives) first.
Posted by Paul Vincent at 17:01 No comments: