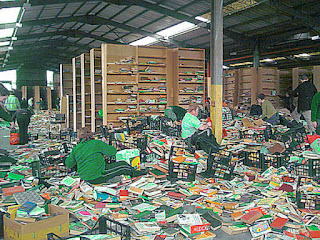 Ever since I started selling my e-books on-line I've been building up a list of contacts. These include other authors, readers, editors, magazines reviewers, promotion sites and lots more. Over the years I've noticed quite a few patterns, but some stand out more than others.

Some are obvious, like most scifi writers are male and most romance writers are female, but others have surprised me. Nearly half the horror writers I've discovered are female - call me sexist but I didn't expect that. I also didn't expect there to be so many paranormal romance writers. And by "so many", I mean more than all other authors added together. It's a popular genre but it's beginning to look like there are actually more people writing it than reading it.

On Twitter alone I have found just over ten thousand authors, so far! Some have written dozens of books, some make a full-time living from it, some are struggling to sell more than a few dozen copies and others are still working on their first novel.

I seem to be in a minority in believing that YA (Young Adult) and MG (Middle Grade [US]) are not genres in themselves, but rather age or audience classifications. So many authors say they write YA when I think they really mean that they write for a YA audience. After all you can write many genres for YA and MG (and any other age group).

The sheer number of authors has astounded me. As to whether it's a good thing or a bad thing for readers I have yet to decide. I don't know if readers are spoilt for choice with an incredible selection of quality new books being published every day or are just wading through a tidal wave of dross (now there's a mixed up image!) desperately searching for something worth reading.

It's no wonder I struggle to get anyone to download my free novel even though it gets excellent reviews.
Posted by Paul Vincent at 14:58 1 comment: