Tomorrow is the first day of 2014 and I have to admit that I am looking forward to leaving 2013 behind. I began the year with high hopes, full of enthusiasm and plans for new projects. In contrast, I am ending the year feeling like I've been beaten into submission and not much further forward than I was at the end of 2012.

My plan was to release four new books this year. One of them was already complete, just going through the final proofreading cycle in back in January. The second was in the latter stages of editing. It seemed that writing another two novels in the remaining ten or eleven months should have been quite achievable. However 2013 decided to hit me with two bouts of illness, both seriously incapacitating me, one leading to surgery. I also suffered a string of problems at work, most of which were unrelated to my health. I write in my spare time and when work begins to take up more and more of my time, writing pretty much goes out the window.

Mostly through brute force, I succeeded in releasing two novels (Astronomicon: Icarus and Astronomicon: Those Left Behind) but the third novel still lies unfinished. Worse still I'm not currently working on it as I've switched to a different project that I believe will enhance my writing career much more in the long term. Consequently I'm not expecting to publish any books in the first quarter of 2014. That will leave a gap of over a year in my releases. So I feel I should apologise to all the people who are looking forward to the next Astronomicon novel. There will be more but I'm not in a position to predict when.

I have big plans for 2014 and fully intend for it to completely overshadow 2013. So Happy New Year to everyone. Let's make this a good one! 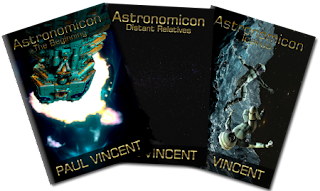 Is there too much new #scifi?

I've been writing and publishing science fiction for almost three years now. Science fiction has been my hobby and fascination for as long as I can remember, so when I started writing it seemed the obvious genre work within.

What I've learned from the last three years is that there are an incredible number of people writing science fiction novels and short stories, and probably just as many creating fan fiction for most of the well-known movies and television series.

I am coming to the conclusion that there's only limited space in the market and the huge number of science fiction writers out there is simply producing far too much material for the market. Up to a point the good stuff will float to the top, but I suspect that these days there is such a deluge of material that even some of the good stuff simply gets lost in the crowd. No-one can possibly be aware of everything that's published (and by that I am very much including the self-publishing world) so those authors without the marketing and promotion skills to draw attention to their work will tend to sink without trace, regardless of how good their writing is.

Short of persuading less people to write science fiction, I don't see any fix for this unfortunate situation.

Although my love of writing science fiction isn't about to end, I'm going to jump ship and try out another genre. What out "Crime Thrillers" - here I come!
Posted by Paul Vincent at 20:49 3 comments:

Do you always start with the 1st book in a series?

I realise that this will vary depending on the series, but I thought the urge to start with the first would be much stronger with most readers than it appears it is in reality.

Each of the last two novels I chose to read were both members of their respective series, but neither were the introductory novel. I did not deliberately decide to jump in part way through, it was down to which books were physically available at the time. Although I would have preferred to start at the beginning, it was not a strong enough factor to stop me reading either book.

The art for any author is to make any subsequent novels in a series readable and enjoyable without any prior knowledge from previous instalments, whilst satisfying those readers who have absorbed every last detail from previous books. It is a difficult balance to achieve.

My Astronomicon series of science fiction novels has been moderately successful, but the sales curve has not matched what I expected. I always assumed that the first novel (Astronomicon: The Beginning) would outright sell the best, and then 50-60% of those readers would go on to buy the second novel (Astronomicon: Distant Relatives). Predicting the proportional sales of the third novel (Astronomicon: Those Left Behind) was going to be trickier, but I was hoping for it to sell at least 75% as well as book two.

Everyone has told me that it is clearly the best novel of the three, so I was hopeful that it would get close to matching book two's sales. However, for the last couple of months, book three has been selling more than book one and book two combined! Maybe quality matters much more than position number within a series?

What has your experience been of sales of novels within a trilogy or series?
Posted by Paul Vincent at 14:15 2 comments: